Taiichi Ohno was born in Manchuria, China in 1912. He was a Japanese Industrial engineer and businessman. Ohno graduated at the Nagoya Technical High School (Japan). He joined the Toyoda family: Toyoda Spinning upon graduation in 1932. This was during the Great Depression. Thanks to the relation of his father with Kiichiro Toyoda, son of Toyota’s founding father (Mr. Sakichi Toyoda). In twenty years he made a career at Toyoda Spinning. 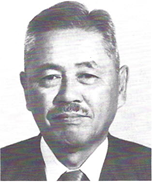 He moved to the Toyota motor company in 1943 where he worked as an assembly manager at the engine manufacturing shop of the plant. He gradually rose through the ranks to eventually become Executive Vice President.

At an early stage, he already used his entrepreneurial and organizational skills. He was looking for ways to solve the better utilisation of overcapacity of equipment, because he had to take account of the lower production volumes of Japanese industry in the post-war period.

For Ohno the Industrial Engineering (IE) was not a partial rationalization or production method, but a methodology with which the whole company could be observed and included. “IE is a system, and the Toyota production system can be regarded as IE Toyota-style.”

Japanese business leaders were early witnesses of the cause of lower productivity of Western industrial companies: the wrong application and interpretation of one of the scientifically findings based on the management of Taylor’s organizational model. They found that – in contrast to its Japanese operations as well as to the basic ideas and the actual intent of Taylor – the Western companies increasingly demanded that the creativity of development and management and then forced the ideas upon of the executing staff.

On the other hand, some Japanese companies called in on how Taylor stimulated, the necessity of involvement of all employees in the improvement of work processes. This was backed with that the increasing pressure of global competition required to use all available creativity in a company. Which also included the creativity of production workers.

in 1956 Ohne travelled to Detroit to visit the automotive factories, Ford Motor Company and General Motors. He analysed the Henry Ford production system and adapted it to his own purposes, since this system of mass production for small quantities in large variety is not appropriate. The production had to be efficient. At Ford, the work sizes were minimised so the workers no longer had to think. There was only one motto and it was called “Move the sheet metal!”. Ohno has given its workers the opportunity to stop the assembly line if there was a problem, to solve the problem on the spot.

Ohno solved the apparent conflict between production line and small quantities, because he only let each station (each pace) produce the exact quantity that the next station needs. In addition, the parts manufacturing, material handling and deployment were both simultaneously and synchronously throughout the entire production process chain.

This way, the base for the “just-in-time principle” arose at Toyota. Compared to the pursued approach of Taylor, there was a significant difference in the objectives of Ohno, that not the obvious quantity of output of a work unit is what counts (push principle), but the exact operation of customers wishes (pull principle).

The seven wastes model to identify the company wastes, became a core of many academic approaches. These wastes are:

Ohno’s principles also influenced areas outside manufacturing. These have been extended into the service arena. For example, the field of sales process engineering has shown how the concept of Just In Time (JIT) can improve sales, marketing, and customer service processes.

This website uses cookies to improve your experience. We'll assume you're ok with this, but you can opt-out if you wish. Read More