STARTING SITUATION
The producer had to make the choice: continuing the pre-Assembly or to outsource this work.

CHOSEN APPROACH
Firstly all the existing standard times were updated. In parallel, the layout of the departments, tools, and the supply and goods delivery were examined. Paths are shown by spaghetti-diagrams. By classifying potential improvements in a short, medium and long term, the benefit per phase became

clear (with investments, change of methods, etc.). Together with Logistics ABC-delivery has been chosen, to reduce the m2 and  thereby shorten paths.

During the creation of a matrix, with all recommendations per phase, a chart is also coupled. With that, all savings per phase become visually clear. This helps the management make choices and implementation easy. 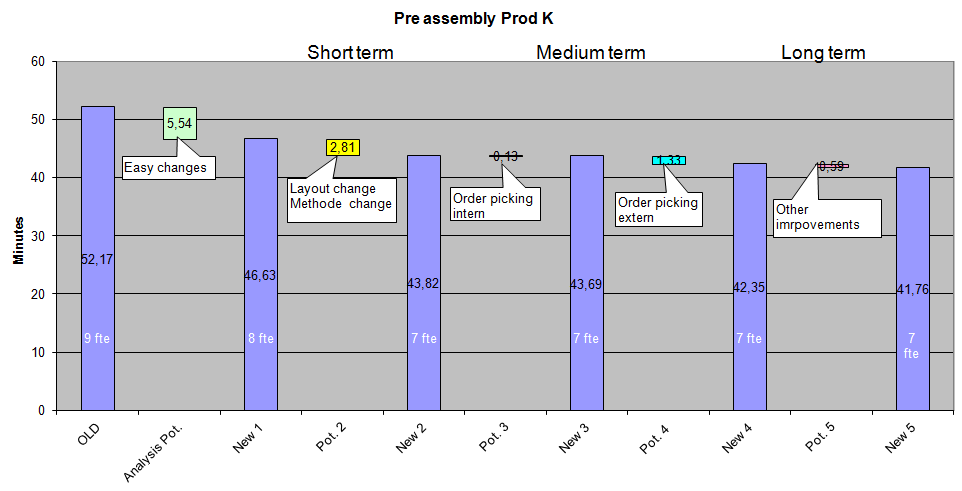 Before the implementation, the analysis and improvement proposals are discussed with representative employees, which increases acceptance.

RESULTS
The pre-Assembly department is kept at the factory. By updating the standard times, small method adaptations and small investments, the number of full-time employees could be reduced from 9 to 7. Also through steady delivery of source materials, shortened transport and walk paths. An additional advantage is that the delivery to the assembly line is in sequence from now on.