Taylor spent as much time as possible to improve the working conditions for his employees. He experimented with light, splitting up work and many other steps. In principle, his ideas were Lean-thoughts already. Lean is therefore created in the U.S.A. and not in Japan, as so often is claimed. Unfortunately, Taylor is still seen as a negative scientific management developer. However, he understood the principle of Method. He was really examining how tasks could be divided into useful elements for everyone’s benefit. 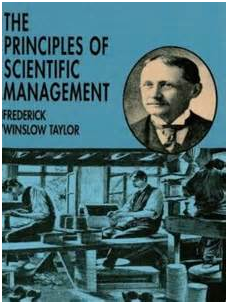 for Midvale Steel. There, Taylor created the basis of his thinking by studies. Employees were paid per produced casting. When the production went up, the management lowered the rates. The employees therefore delayed the production, until the management restored the old rates. Not exactly a starting point to make the factory more productive. Taylor developed the most efficient way of working and offered the employees more money, if they did what the bosses said. Everyone would benefit from this. Taylor designed tools in optimum form for this purpose as well.

At the end of the 19th century, he already carried out movement and time studies about working processes and is a pioneer and co-founder of modern industrial engineering. During the second industrial revolution in which mass production became possible, management problems arose at companies as a result of scale-up and increasing complexity of the production process. Although Taylor wanted to achieve a mental revolution with his theories concerning control of processes, is especially found in current interest of standardization and efficiency. A target of Taylor was to transfer the methods of experimental science to the production operation. That is why he published his considerations of 1895 in a number of writings.

His most important book was “The Principles of Scientific Management.” Looking at the still actual debate about the by Taylor developed scientific management system, within science and between the social partners, is clear that the criticism towards Taylor, “long outdated” and “inhuman” Taylorism, still has not become silent.

Taylor’s system created “a new division of labor between management and employees: the assignment to manage the responsibility for discovering the best ways of performing units of operations, and the further responsibility of planning operations and actually having it available at the proper time and place, and in the proper quantity, of materials, tools, instructions and other facilities required by the employees.” This, by Taylor required, separation between executive and planning activity is noted as a point of criticism. However, it has brought considerably increased productivity in the industry up to the present day. The need for a separation of expert tasks and executive work tasks is hardly disputed by anyone, because a corresponding supply of expertise in everyone’s mind is neither appropriate or productive.

The basic idea of the suggestion box is from Taylor. If the new method actually turns out to be better than the old one, it will be set as default for the whole company and the employees should take full credit for their improvement. And they should get a bonus in cash as a reward for this ingenuity as well. This way, the real initiative of employees under the regime of scientific management is realized, in contrary to the old system.”

It’s amazing that the generally positive intentions of Taylor are still in great conflict with the reputation of Taylorism. The word or concept of Taylorism should just be avoided. In the future, critics should focus on the current way of application of Taylor as the father of scientific management and his teachings.

Summary of the basic methods of Scientific Management

This website uses cookies to improve your experience. We'll assume you're ok with this, but you can opt-out if you wish. Read More