George Elton Mayo (26 December 1880) was an Australian born psychologist and organizational scientist. Mayo was formally trained at the University of Adelaide. He graduated. in the masterclass with First Class Honours. In his core subjects, philosophy and psychology, he received an honorary doctorate for Master of Arts from the University of Queensland (UQ), 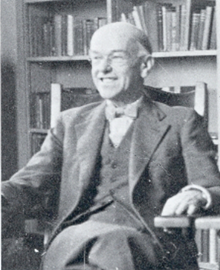 where he taught from 1919 to 1923. Afterward he started working at the University of Pennsylvania. He spent most of his career at Harvard Business School (1926-1947). There, he is considered the founder of company Sociology: The Human Relations Movement.

Mayo came a poor scientist from Australia to the United States. There he knew to convince the Rockefeller Foundation the usefulness of research of labour factors and productivity. That is how he got the opportunity at the Western Electric factories in Chicago, with Hawthorne Experiments. One of the most comprehensive and long-term studies of productivity and labour relations in history. Western Electric produced all parts for telephony for his phone company Bell. The majority of the employees were immigrants.

In fact, Mayo was not the one who performed the practical experiments, but his assistants Roethlisberger and Dickinson. He provided for carrying out some research to improve the production, with for example the level of lighting a workshop, reward structures, health factors, fatigue, productivity, complaints, brakes, etc. However, he came to the conclusion that work satisfaction greatly depends on the informal social pattern of the working group. Better results, both in terms of commitment and cooperatively, can be achieved if the employees feel that they are important and are involved. Physical conditions and/or financial influences seemed less motivating. The employees themselves will form working groups, which are used by the management in a more efficient organization. Mayo concluded that the efficiency of the employee depends on both the satisfaction with the job as well the social environment. The results are summarized in the book “Management and the worker”.

The “Hawthorne Effect” at informal groups within the company, exerts a strong social control over the work habits and attitudes of the individual employee. The needs of the employee of recognition, security and belonging is more important in determining the moral and productivity than the physical conditions under which he works. The employee is a person whose attitude and effectiveness are conditioned by social demands within and outside the company.

Productivity can rise, if personal interest is shown in working conditions. Until about 1930, the priority was: make the employee capable for the work. Because of the increasing complexity of products and therefore more complex manufacturing processes, the necessity for specialization arose. The work has become more varied. The strict criteria of productivity were hardly effective. There was a new priority: able the work to the worker.  Mogenson formulated in this context, the motto: “Work smarter, … not harder!”