Gilbreth is one of most remarkable in this group. Gilbreth was born in Fairfield (Maine) in 1868. He had no formal education beyond high school. His father ran a hardware store, but he died when Frank was just 3. His family moved to Boston (Massachusetts) at that time. After high school, Gilbreth attained a job as a mason apprentice and then became a building contractor. Then he turned into an inventor with several patents. Afterward he became a management engineer. He became an occasional lecturer at Purdue University eventually.

He was the pioneer of the time motion studies. First by taking pictures, later by film recordings. Herewith, a clock and sometimes small lights were characteristic (see picture). Depending on the detail of the work he filmed accelerated or in slow motion. This way he tried to map the nature and nature of movements during task performance as accurately as possible. Gilbreth came to the realisation that depends on the execution time for a sequence – same exercise (skill) – same suitability (ability) and – same power bills (effort), the work executing people within reasonable limits of the applied method. So he could get people 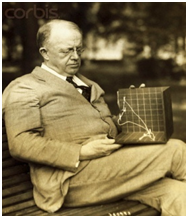 targeted. Gilbreth came to the insight, that the execution time for a process with:
– equal experience (skill),
– equal adequacy (competence) and
– equal performance delivery (effort),
by people within reasonable limits only depends on applied method. This way he was able to train people focused as well.

One of his projects was the optimisation of masonry. He brought, by observing and analyzing, the number of motions from 18 back to 5. This way, he increased the masons speed from 175 to 350 bricks per hour!

To get an impression of his work, see: www.archive.org/details/OriginalFilm

According to his theory, all human movements can be subdivided into 17 basic motion elements (Therbligs). To determine the optimum working method, he eliminated every Therblig which did not serve the progress of the work. He is therefore considered to be the founder of the predetermined time systems. Like Methods-Time Measurement and WorkFactor. Therblig is the inverse of Gilbreth, whereas “th” is considered as a letter.

That Gilbreth was a striking figure was pointed out by the book “Cheaper by the Dozen”, which was written by two of his children. This book is really recommended. It is a very entertaining book about the whole family, which consisted of twelve children. Children who also played a large role as test subjects to the improvement drift of their father.

Gilbreths woman, Lillian Evelyn Gilbreth, was a PhD. in organisation psychology. She has always  worked intensively together with Gilbreth. There are plenty of notable situations that took place at home. At one morning, Gilbreth came down with a bloody face. So his children asked “What have you done?”. He shaved himself with two razor blades. Working with two hands offers more output at mounting activities than with one hand. But with shaving this wasn’t such a good idea. He even  wanted to let film the removal of his own appendix. Because, undoubtedly, there were also opportunities for improvement for that. Unfortunately for him the filmmaker, the filmmaker forgot to put a film tape in the camera because of all consternation.

He also asked his wife to measure with a stopwatch what is faster: to button up a vest from top to bottom or from bottom to top. It was good that Gilbreth married her in 1904. He was a huge chaotic person with all kind of wild improvement ideas. She knew how to create order and how to work this out. After Frank Gilbreth died of a heart attack, she continued the work successful and took over the role as provider of the family as well. Initially she published under the name of her deceased husband, because her contemporaries did not take a woman seriously in a typical men’s job.